climbing protection: when to use cams vs. nuts

TRADITIONAL CLIMBING, ALSO CALLED TRAD CLIMBING OR JUST “TRAD,” is a particular style of roped climbing that involves placing your own protective equipment as you move up a climb, then removing it when you’re done. This equipment is also called protection, or “pro,” because it protects you from hitting the ground in a fall. This is in contrast to sport climbing, where you rely on permanent protection like bolts, which stay in the rock after you’re done. While sport and trad both offer a multitude of physical and mental challenges, placing your own pro adds the cognitive task of finding puzzle pieces that fit in the rock while also performing complex and rigorous body movement. But like most things, the added difficulty often results in greater reward. Instead of being restricted to bolted sport crags, as a trad climber, you can explore the great mountain ranges of the world and get way off the ground on classic formations. Trad climbing opens the door to the adventure of starting a climb well before the sun comes up and stumbling back to the car way after the sun goes down. Sending a hard sport climb is satisfying, but trad climbing offers a feeling of accomplishment unmatched by clipping bolts.

Probably the most confusing part of trad climbing is how such seemingly simple pro can be put in the rock quickly and easily removed, while also being strong enough to hold a big fall. The secret is in the smart design of these pieces of metal, which has progressed and evolved over the last 50-plus years. Using advice and expertise from top trad climbers Miranda Oakley, Tim Emmett, and climbing guide Paul Rachele, we created an overview of the different types of pro, the basics of how to place trad gear, and some tips on getting ready for your first trad lead.
TYPES OF GEAR: ACTIVE AND PASSIVE

There’s one basic difference between active and passive protection. Active pro has moving parts that expand or contract to fit into a crack. Passive pro has no moving parts and relies completely on the shape of the metal and how it fits into the crack. In the history of climbing, passive protection came first, several decades before active protection. Cams entered the scene in the late 1970s with Ray Jardine’s invention of the spring-loaded camming device. While there are several different types of passive pro, including hexes, chocks, and Tricams, the most common type is the nut, also called a stopper. Active pro refers mainly to cams, unless you are climbing a wide crack (called an offwidth), which might require the active pro known as a Big Bro. Both active and passive pro comes in a variety of sizes, with different numbers or colors corresponding to the size of crack each piece might fit.

One of the big advantages of active protection is that it’s multidirectional, meaning it will stay in place even when pulled upward. Passive pro is unidirectional and usually protects a downward pull only, meaning it can come out when it’s pulled upward. While strong upward forces on trad protection aren’t super common, sometimes the force of the rope moving up through a nut is enough to jiggle it out of place. One way to lessen this force is by extending the gear, meaning clipping a sling or quickdraw between the pro and the rope to extend the distance between them. There are many other reasons to extend gear that are beyond the scope of this article, so make sure to get proper instruction. 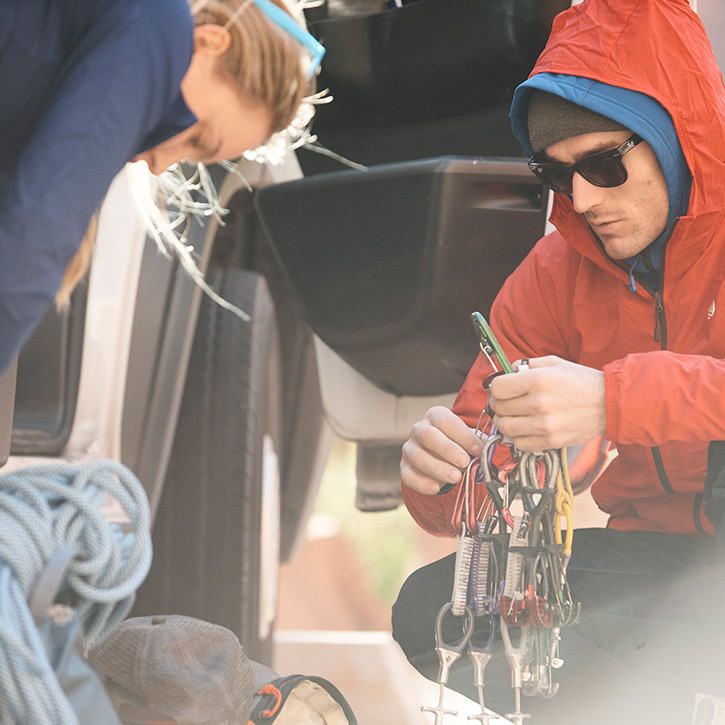 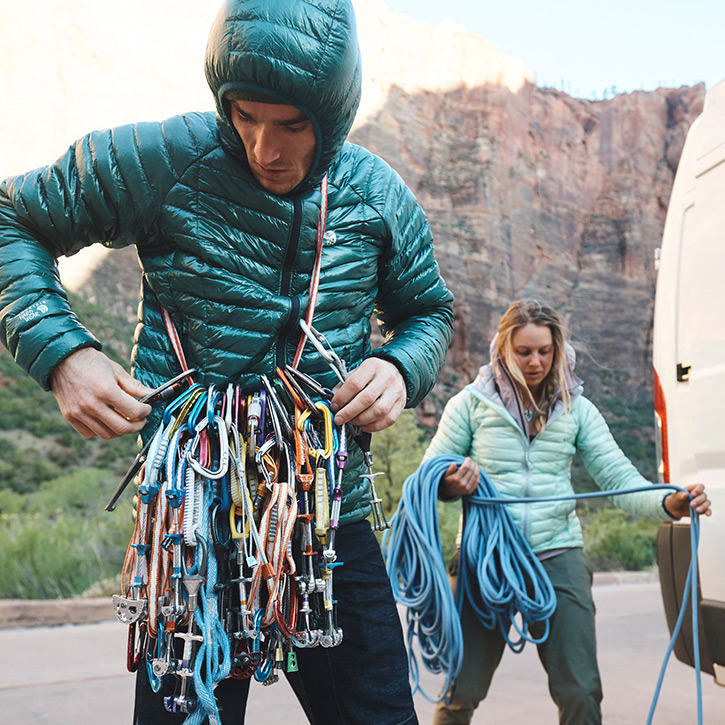 WHEN TO USE ACTIVE OR PASSIVE PRO
Most trad climbers carry a range of cams and nuts on every route to be able to fit the wide variety of crack sizes and shapes. Generally, active pro is larger, heavier, and more expensive, but it also fits into more places than passive pro. Oakley, Emmett, and Rachele all say they typically go with cams over nuts, for ease of placement and removal, and the fact that it’s less likely to lift out in the event of a fall. The notable exception is to use a nut any time there is a significant constriction combined with a good stance, meaning you’ll have time to stand there and slot the nut just right. “In alpine terrain, I usually carry fewer cams [to save weight and space], so I place stoppers whenever I can and cams when I can’t,” Rachele says. “If the climbing is hard, or the crack parallel, use a cam.”

HOW TO PLACE TRAD GEAR

Rachele has been climbing since 2005 and became an IFMGA-certified guide in 2016. He’s taught hundreds of clients and students the basics of gear placement using the simple acronym—ROCK STARS. Each letter represents one element you should consider every time you place a piece of gear. Since placement possibilities in rock are infinite, it’s rare to find perfect circumstances for each of these categories. However, you should be thinking about this checklist each time you go to place a cam or slot a nut, and then making micro-adjustments to maximize each one. The list might seem overwhelming at first, but the more you practice, the more it will become second nature to evaluate all these factors in an instant as you quickly slam in a solid piece of gear.
Rock Quality: Both Macro and Micro.
Even when your actual gear placement is perfect in every other way, if the rock you’re putting the piece into is bad, the placement is bad. The force of falling onto a piece of gear (or using that same rock as a hand or foothold) could cause the rock to detach from the wall. Rachele emphasizes to check rock quality on a macro and micro level before slotting your pro. Macro means looking at the whole feature, whether it’s the size of a toaster oven or a coffee table, to see if it’s detached or loose. Micro means looking at the area immediately around the placement for crumbly or fractured rock.
Size: Bigger is Better.
Finding a piece that will fit the available cracks and fissures is paramount, but generally speaking a larger piece of gear will be stronger than a smaller piece of gear. (Think #2 cam versus micronut.) For active pro, pay attention to “overcamming” and “undercamming.” Overcamming is when a cam is placed tightly, meaning the lobes are squeezed past their ideal point. While an overcammed piece will hold, it can be difficult to remove. Undercamming is when a cam is placed loosely, meaning the lobes aren’t squeezed tight enough to their strongest holding point. The danger here is that an undercammed piece could easily come out of its placement and not hold a fall. That means if you have to choose between an overcammed or undercammed piece of pro, go with overcammed.
Type: Passive in Constrictions.
Active protection is designed to fit into parallel-sided cracks, while passive protection needs a constriction to be most effective. That means a nut should slot downward into a constriction, or a narrower part of the crack. When you’re in a good stance to place a piece, really examine the crack, looking up and down from eye level, and often you’ll find mini constrictions that you might not see at first. They might be a foot higher than where you’re looking, or at your waist. Keep in mind that active protection is also more reliable when placed with a tighter constriction directly below it as well.
Angle: Orient in the Direction of Loading.
The piece should be placed so it protects a fall, which puts the direction of loading primarily downward. That means when properly placed, the piece should be pointing mostly down and slightly outward. The latter helps it not “walk,” or move out of its placement, as you keep climbing up and the rope gently jostles the piece. Once you place a piece, give it a sharp tug in the direction of a fall, making sure it stays in place. If it pops out or moves a lot, place it somewhere else or find another piece.
Removal: Easy to Take Out.
When you place a piece, think about how difficult it might be to remove it. That means not shoving a cam so deep into a crack that the follower can’t reach the thumb loop, or hammering a nut into a constriction so it’s welded in place. Your placement should be solid, but not impossible to clean.
Surface Area: Maximize Area of Contact Between the Gear and the Rock.
Sometimes your piece must sit near the flared opening of a crack, or in coarse granite, one cam lobe might be barely touching a large crystal. To maximize the surface area, fiddle with the gear by sliding it in, up, or down just a little further until there’s as much metal on rock as possible. These micro-adjustments could make all the difference.

3 TIPS FOR CLEANING GEAR
“The keys to getting a cam out quickly are usually timing, the way you squeeze the trigger, and figuring out how the cam entered the crack. To release the cam, the idea is to use two fingers to hold the trigger bar and cam still, while you apply pressure with the thumb to push the stem deeper into the crack. As soon as the lobes release from the rock, then—and only then—do you pull out with the two fingers. Then you can move it to the widest part of the crack to remove it.”
—Tim Emmett
“How the gear is placed has a bigger impact on the ease of removability than the skill of the climber cleaning the pitch. The main principle is pull up hard on stoppers, and pull cams in the direction where the crack gets bigger. The most common way cams get stuck is when the climber pulls the trigger and pushes the lobes into a smaller area in the crack.”
—Paul Rachele
“Nothing can replace practice and experience. Always look at the cam placement before attempting to take it out. Never yank on cams, always be gentle. Use the nut tool to push the cam lobes in to get some movement. If the cam moves at all, it’s not stuck.”
—Miranda Oakley
how to get ready for your first trad lead
gear up for the know-how